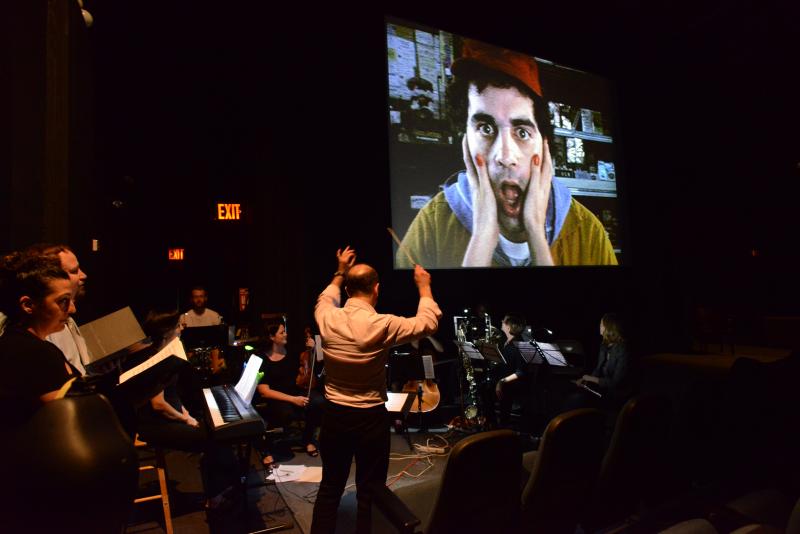 Think about that: newly composed music to modern silent films.

Boustead is inAustin for a one-day event featuring this concept. He sat down with KUT to explain what it’s all about.

Do You Have to Explain The Idea of Modern Silent Film a Lot?

“When you hear silent film you think of the preservation era, the ‘golden’ era as people call it for silent films. And even, in Chicago, when I started this I reached out to the Chicago Silent Film Society and they had no interest in modern silent films, ‘no, no, the best is behind us, we just want to preserve the past.’ So there is definitely that idea and even some reluctance to have silent film. But there are a lot of directors who are choosing to work in silence for a lot of reasons.”

“A misconception people have is that it’s going to be art-y or something. Many of the films are very funny, there’s a real range… It’s different than seeing a regular movie, of course, I really do think there’s a heightened awareness… If anybody who thinks they know what a silent film is, they should really come out and see this because this is going to blow your mind, it’s completely different. The way that directors are choosing this sort of sly sense of humor they have often. The way they tweak the old forms, the way they ignore the old forms and do something completely new and the way that they innovate. Some of these films are just really, really phenomenal. They deserve to be seen. And the music is fantastic, too.”

So Why Compose a New Soundtrack for These Films?

“I just have been frustrated that composed music isn’t as popular as so-called ‘popular music,’ needless to say. And I wanted to get this music out there because there’s an awful lot of really interesting music being written by composers and I maintain that it’s the most interesting time for classical music now because we’re hearing from composers in South America and Asia. We’re hearing from men and women. Whereas the so-called ‘golden era’ for classical music is only men, really, from six or seven European countries. So there’s this incredible explosion of wonderful music that hardly anyone is hearing.”

What Will the Austin Audience See?

“We’re bringing films that have been vetted. We’ve done these many times. We did them in Chicago, we did them in New York. We know, these are audience favorites, these are fun films. People are going to really like it. So you’re going to come into the Marchesa Theatre and you’re going to see a group of musicians down in front. Our conductor will be there, he’s the one who can see the screen, he’ll cue the projectionist to start the film and then he’ll start the music. And it’s going to be a whole lot of fun.”