‘Half State’ Performance by Todd Rewoldt

Saxophonist Todd Rewoldt will perform my piece Half State at Kostabi World in Manhattan on June 2nd.  Originally written for flute I made this arrangement for Todd and am glad I did as he plays the heck out of it!

Sound of Silent Film is April 30 and May 1

ACM’s 16th annual Sound of Silent Film Festival will happen on April 30 and May 1 in the VIN312 parking lot in Ravenswood.  We’ve got sixteen new films to screen with commissioned music performed live.

I didn’t write for the festival this year as I’m hard at work on a piece for another project.  But I produced it…  Don’t miss Sound of Silent Film!

I’ll be playing my piece Time Drips with violist Beth Holub this Sunday as part of a Composers Concordance concert at Drom in Manhattan.  In-person attendance is limited to 25% capacity but we’ll be streaming it live on CompCord’s Facebook page.

I have a gig!  So rare to play live these days but Composers Concordance is doing a small concert at Michiko Studios in Manhattan and I’ll be playing my piece Marginal Capacity in a new arrangement for piano, trumpet, electric guitar, electric bass and drums.  Looking forward to it!

I wrote this short piece for an audio walking tour in Chicago.  As part of ACM’s Thirsty Ears Fest 2020 we commissioned ten composers to write one-minute pieces inspired by ten cultural and historic sites.

My piece was inspired by the former Curt Teich Postcard Factory which made distinctive linen postcards celebrating the lure of the open road.  I wrote a fast, driving piece in A major that mashed up several different Americana musical cliches.

It’s getting performed live on October 9 at 8:00 PM at VIN312 as part of the Thirsty Ears Festival.

My score for the short silent film Devil’s Food Cake will be performed on October 9th as part of the Thirsty Ears Festival in Chicago.

At long last the feature film I scored last year is premiering!  Dreaming Grand Avenue, directed by Hugh Schulze, is a wonderful film about two people who keep meeting in dreams and eventually meet in real life and, you know, fall in love.

The film is also about Chicago’s violence epidemic, the perils of corporate greed and the wisdom to be learned in dreams, and the dangers in ignoring them.  The film has an all-star cast including Jackson Rathbone and Wendy Robie among many others.

It screens at the Chi-Town Movies Drive-in in Pilsen.  Going to be fun! 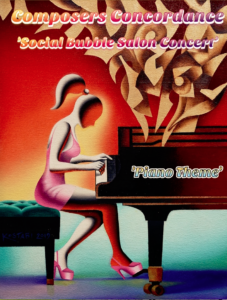 I’ll be playing two movements from my solo piano piece Four for Diane Arbus, inspired by four images from the groundbreaking photographer, at a social bubble concert on August 4th in the Chelsea home of Mark Kostabi.

August 4, 6:00 EDT
No audience allowed but you can stream it live here. 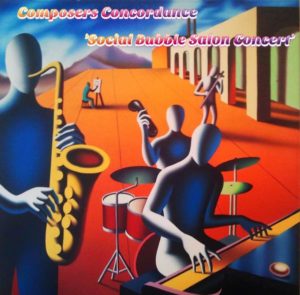 I’ll be playing my piece the Numinous with violinist Lynn Bechtold in a fun social distance concert in a townhouse in Manhattan on June 28. I’ll also give the World Premiere of a new piece by composer Charles Coleman accompanying Charles as baritone.

The concert also features music of Gene Pritsker, Lynn Bechtold, Mark Kostabi, Milica Paranosic, Peter Jarvis and Jed Distler and will be streamed live to all of our Facebook pages.  Check it out! 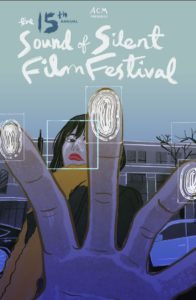 Ok, so the fest didn’t go on as planned on March 28.  No surprise there.  But the Sound of Silent Film: VIrtual Edition is this weekend!  There are two completely new shows and they are fabulous.  We’ll “air” them this Friday and Saturday evenings.

The presentations are free but, because we’ve put an enormous amount of time, energy and money into making sure that this production is the highest quality possible, we’re asking that everyone register to receive the streaming link.

We’ll send it out Friday and Saturday morning for each show.  Nearly 1,000 people have registered so far.  Don’t miss the chance to watch great films and hear great music with people around the country in real time!