Boustead’s mission: Putting new classical music within reach of all 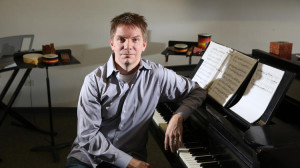 In concert, in the classroom, on the radio and over the Internet, Seth Boustead uses every available platform to spread the word that classical music is a living tradition, an art form of vast global-outreach potential that’s thriving as perhaps never before.

There’s one hitch, as he sees it: People must get over their inbuilt fear of the new, and open themselves to the rich and diverse listening experience the art music of today can provide.

And that’s where his multiform organization, Access Contemporary Music, comes in.

“I think of ACM as a philosophy,” says the 43-year-old, Missouri-born composer, pianist, educator, radio host and executive director of the Chicago-based, not-for-profit enterprise. “Our mission is to break through barriers, update the popular image of this amazing art form and include what’s happening now alongside the older ideas of wigs, quill pens and the 3 Bs.”

Boustead has been pursuing his Utopian vision of contemporary music-for-everyone at ACM since 2004 when he co-founded the group (originally Accessible Contemporary Music) as an advocacy organization for living composers. Since then, ACM has branched out in many directions – teaching creativity to students in its music schools, presenting concerts of new music, collaborating with member composers from around the world, and many other services.

This fall, ACM released its latest album, “1,001 Afternoons in Chicago,” a radio play for actors and musicians, with a score by Boustead and Amos Gillespie based on stories by the celebrated 1920s Chicago journalist and Hollywood screenwriter Ben Hecht. The project was created in partnership with Chicago’s Strawdog Theatre Company.

Boustead will be taking time out from his many duties – which include hosting a freewheeling, weekly contemporary music program on WFMT-FM 98.7, “Relevant Tones” – to perform his first-ever solo piano recital, Monday afternoon at the Chicago Public Library Cultural Center.
Most of the program will consist of his own pieces. “With my extensive history of advocating for other people’s music, I thought it was time I did some advocating on my own behalf,” says the composer-pianist, with a chuckle.

Web-based technology has played a crucial role in ACM’s development, from its humble beginnings in 2004 as a group of local musicians Boustead pulled together to read through music by living composers. (That group went on to become ACM’s resident Palomar ensemble.) Through 2012, ACM solicited brand-new scores over the Internet from composers around the world for an ambitious project, Weekly Readings, later recording the pieces and posting the audio files on ACM’s website, acmusic.org. To date the unprecedented project has yielded around 160 scores.

More recently Boustead and his executive team have been focusing on an outgrowth of Weekly Readings, a project called Composer Alive. Each year since 2006 a composer from a different part of the globe has been commissioned to write a work in installments for public performance and recording. Thus far composers from China, Ireland, France, Mexico, Japan, Canada and the U.S. have received commissions. Polish composer Agnieszka Stulginska is the designated composer for 2015.

ACM bills itself as the world’s only global composer membership program, partnering ensembles in other cities to promote members’ music in addition to commissioning scores for ACM’s Sound of Silent Film Festival and other innovative projects.
Little or none of this would be possible without Boustead’s dynamic deployment of Internet resources or, for that matter, his formidable powers of persuasion when dealing with composer-colleagues around the world.

“I’ve always found it interesting that composers’ associations are always regional – there is nothing that’s actually global,” he observes. “We want to fill that gap. So we are talking to all these groups and offering their members discounted memberships. As they join, we can establish larger partnerships and build coalitions. Next year we hope to do an exchange whereby we play music by South Korean composers over here and they play music of our members over there. We’re also looking at partnering composers’ associations in Ireland and Finland next year.”

Visit Access Contemporary Music’s website and you will find a gold mine of information about the organization, its mission and history, along with a goodly amount of new music reflecting ACM’s wide stylistic purview. Here you can access video and audio recordings of Composer Alive commissions and other performances Palomar has given in Chicago in recent years.

Or, drop by one of the Chicago storefronts that house ACM schools of music in the Ravenswood, Rogers Park, South Loop and Avondale neighborhoods and you will witness a sonic beehive of activity that proves Boustead practices what he so altruistically preaches.
Music lessons are offered to children and adults in piano, violin, cello, flute, clarinet, saxophone, guitar and voice, along with a composition class for adults and a workshop for high school composers. Students are taught to think creatively: Along with learning how to read music, they are given the tools with which to actually compose their own music they and others can perform.

“For most of our students, the ACM school is the first contact they have with contemporary music,” says Boustead, who also teaches piano at the school. “Now, many of them regularly attend our concerts along with their parents, and are becoming new music fans.”
Roughly 75 percent of ACM’s budget of $350,000, he explains, comes from tuition fees, the remainder from concert ticket income, donations, grants and album sales.

So it’s onward and decidedly upward for Access Contemporary Music and its visionary director, who says he’s convinced we are living in a golden era for classical music.

“Never before have so many people from so many countries contributed such imaginative, exciting music to the art form. We just want more people to see it the way we do. Everybody should take a moment to sit down and listen to unfamiliar new music, because it has so many great things to say to everybody.”
Seth Boustead will play a free solo recital of his piano works, along with music by Duke Ellington and others, at 12:15 p.m. Monday in Preston Bradley Hall, Chicago Cultural Center, 78 E. Washington Blvd.; sethboustead.com.