‘1001 Afternoons in Chicago’ comes to life, in music and in pictures 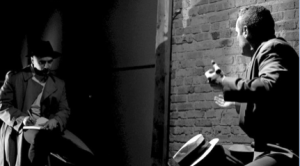 “Dapper Pete and the Sucker Play” is one of the Ben Hecht stories featured in “1001 Afternoons in Chicago,” a film that will be screened Tuesday at Chopin Theatre. (Dave Less)

Ben Hecht was a Chicago newspaperman who had a great deal of talent, huge personality, ebullient spirit and a realistic regard for the fleeting status of those in his ink-stained profession.

He once wrote this poem for a departed colleague:

We know each other’s daydreams
And the hopes that come to grief
For we write each other’s obits
And they’re Godalmighty brief.

Hecht’s own obits, not brief at all, came in 1964, when he was 70 years old. But he continues to cast a considerable shadow on the city’s cultural scene. Hecht once wrote about Chicago, “I have lived in other cities, but been inside of only one.” For many, he’s still here. 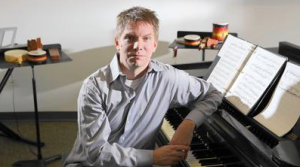 Seth Boustead, who composed the original score for “1001 Afternoons in Chicago” with Amos Gillespie, said it was a wonderful challenge to try to capture the essence of Ben Hecht in music.

The film, based on four columns Hecht wrote for the Chicago Daily News in the early 1920s, is a spectacular and original work, directed by David Less, which combines an original score composed by Seth Boustead and Amos Gillespie; features actors from the Strawdog Theatre company and musicians from Boustead’s Access Contemporary Music; and showcases vintage film footage of the city as well as contemporary shots, illustrations and animation.

It will undoubtedly spur interest in all that was Hecht.

He’s available, easily found in the book “1001 Afternoons in Chicago,” a gathering of 60 of his columns republished in a handsome volume in 2011 by the University of Chicago Press, with haunting black-and-white illustrations by Herman Rosse and a lively and informative introduction by teacher/editor Bill Savage. Savage writes that Hecht “preserves, in language both idiosyncratically Hechtian and broadly Chicagoese, the city of its day and ours.”

Hecht is also “alive” in a delightful and artful blog “1001 Chicago Afternoons” (www.1001chicago.com) created by writer/editor/teacher Paul Dailing. Also have a look at www.benhechtbooks.net. And, if you are particularly energetic, all of Hecht’s papers, correspondence, photographs and other materials reside at the Newberry Library, donated by his widow, Rose, who died in 1979. It is a vast gathering, 92 linear feet that includes 144 boxes and 19 oversize boxes.

No one has done more to keep Hecht with us than Boustead, the young composer, host of a syndicated radio show (“Relevant Tones” on WFMT-FM 98.7) and founder/head of Access Contemporary Music. He was introduced to the author’s work nearly a decade ago.

“Hecht’s language is fantastic,” says Boustead. “It is a wonderful challenge for me to try to capture the essence of his stories in music.”

He started doing that in 2008 when he, prompted by Gillespie, gathered members of his ACM, in collaboration with The Moving Architects dance company, to present two stage performances of “1001 Afternoons in Chicago.”

“Amos brought me in on the project, and I read the stories for the first time and was smitten,” says Boustead.

“Then in 2012 I was trying to think of my next project and I wanted it to be something large-scale. By this time I was working at WFMT as a host, and so I wanted something that combined radio, music and literature, and I remembered the Hecht project. I always thought that it was hard to get a sense of the stories from dance. I decided that it would be great to work with a theater company to adapt them for a radio play for live music and voices, in which the music was an integral part. I approached Strawdog and the rest, as they say, is history.”

And so, a show was produced as a play and performed in May 2013 at Architectural Artifacts. That is when Less, who had previously worked on a documentary with Boustead, began talking about and starting work on a film version.

In 2014 a CD of music and words was released (www.sethboustead.com). In April of this year an hourlong radio play version was broadcast live on WFMT (I joined the nice and talented Strawdog folks, in the role of a streetcar conductor).

And now there is the film, about which Boustead says: “It has exceeded whatever lofty expectations I might have had. It is an impressionistic narrative unlike anything you have seen before.”

While the previous projects featured six of Hecht’s stories, the film contains four: “Don Quixote and His Last Windmill,” “Grass Figures,” “Clocks and Owl Cars” and “Dapper Pete and The Sucker Play.” They are all Hecht at his most poetic.

But know that “1001 Afternoons” is not Hecht’s most famous work. That would be “The Front Page,” the raucous hit play (and later film — four versions, to be exact) that Hecht wrote in collaboration with newspaper pal Charles MacArthur in 1928 that would forever define the newspaper business.

Hecht would move from newspapers and the stage to movies, where he became wildly successful. Lured to Hollywood by his friend Herman Mankiewicz — who told him “millions are to be grabbed out here, and your only competition is idiots” — Hecht won in 1929 the first Academy Award given for screenwriting, for “Underworld,” generally regarded as the first gangster movie.

He would never stop writing, fashioning what is arguably the most successful Hollywood writing career. He wrote and wrote and wrote, earning five more Oscar nominations (winning again, with MacArthur, for 1935’s “The Scoundrel”). He earned as much as $125,000 a script, receiving writing credit for 65 films, though experts estimate his uncredited hand can be found in nearly 100 more, including “Gone With the Wind” and “Casino Royale.”

He also wrote books. Understandably for one so prolific, his work is uneven; I’d say “A Child of the Century” is his best.

Hecht had a sizable ego to be sure, and there is no doubt that he would appreciate all the contemporary attention being paid to his work. But he wasn’t much for awards, as I learned many years ago when I had the opportunity to have drinks in the Manhattan apartment of Hecht’s widow, Rose, a charming and chatty woman, who told me, “Prizes didn’t mean much to Benny.

He didn’t even show up to get that first Oscar.” Indeed, he picked it up at some later date and used it for years as a doorstop; it now sits among his many items at the Newberry.

“I may never be done with Hecht,” says Boustead. “We are hoping that PBS will be interested in the film for national broadcast and perhaps we can get it into some film festivals, too. Look, we have only used (a few) of the stories from ‘1001 Afternoons.’ That leaves more than 50.

His language is so fantastic and in each story there are several emotions going on at once, and you can feel how much he cares about people. There’s no telling where all of this might go.”