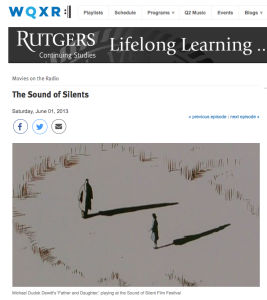 The Sound of Silent Film Festival of Chicago makes its New York City debut at Manhattan’s Anthology Film Archives on June 7 and 8. The festival draws on the legacy of the golden era of silent film, but with a modern twist—all the films were made in the last 50 years. Each film will be screened with a new, live score by composers who are seeking to give us fresh cinematic experiences.

Composer and festival coordinator Seth Boustead joins David Garland to present some of these new scores for new silent films, and to talk about the music and the festival.