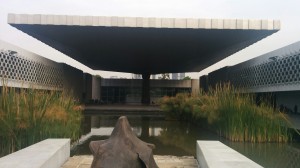 If there’s a more peaceful place in an urban setting for contemplation and tranquil thinking than this lovely patio at the Museum of Anthropology in Mexico City, I don’t know what it is.  I spent several hours here yesterday writing in my notebook, thinking, and just kind of spacing out in general.

Since I’m here in Mexico studying Spanish, language has been on my mind quite a bit.  When I first started studying Spanish five years ago I worked to memorize my vocabulary mainly by relating Spanish words to their English equivalent, but over time I learned to stop doing this and to just picture the object or concept for which the Spanish word stands.

I’ve always been fascinated by how, in learning a language, you learn more than a mere set of different words, you learn how the people who speak that language view our world.  I was thinking of this at the museum, how a mesa for example, is not really the same thing as a table.  You can say that mesa “means” table but that’s not quite true.

Both cultures had the idea for a table, an object on which you could set other objects.  The idea existed in the mind first and then it was made real and then given a name.  This to me is a much more interesting way of thinking of about this than that a mesa is the Spanish speaking equivalent of a table.  It also brings us to Plato’s idea of the theory of forms.  In the theory of forms there is a perfect table that exists in a different world, a spirit world of permanence. It is a kind of archetypal table, of which the table in our world is a mere imperfect copy.

I always thought that this would imply that all potential forms existed in this spirit world and, as conscious beings like humans had ideas, they were pulled forth as imperfect copies in this world.  But, upon reflecting on language and how everything that can be given a name must have existed as an idea first, I now think that we have a direct impact on this world of forms.

It is consciousness that has the power to create ideas and to bring those ideas into the material world, in howsoever imperfect a manner.  Therefore it is consciousness that populates the world of forms in the first place and allows them to be real. We always wonder how consciousness arose but I would argue that there was no other choice but for consciousness to arise, that it is as much part and parcel of the fabric of the universe as anything else.

The Aristotelian Unmoved Mover, the Big Bang, or whatever the “first” event was, was simply the result of a form of consciousness having an idea, and since consciousness or the potential to become conscious, is perhaps the one thing that pervades any understanding of reality, it was inevitable that ideas would populate the world of forms and inevitable that they would then be copied imperfectly in the material world.  That is of course if you believe in the theory of forms.

Anyway, these are the kinds of thoughts that can flit through your mind in a place like this.