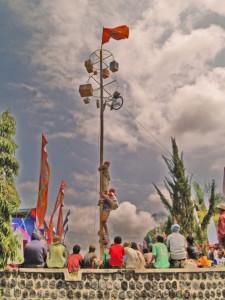 I have to confess that, as the American people ready themselves for their annual pyromaniacal outpouring of frenzied joy at being liberated from the tyranny of a British king, I find myself yet again wishing there were another way to celebrate independence and our near-hysterical love of freedom than the traditional week-long (at least) fireworks displays and general blowing up of things.

I want to point out too that this isn’t just a sign that I’m finally losing the battle against the ever-encroaching crustiness brought on by old age, (although I am.)  No, truth is, I’ve never liked fireworks.  Even as a child I would stand at a fireworks display and count the minutes until we could go back home and I could get back to reading The Three Investigators and the Secret of Skeleton Island.

Yes, a nerdy kid to be sure and grown into a nerdy adult but I can’t be the only one who thinks that freedom from tyranny might best be celebrated with a visit to the library, museum or the cultural outing of one’s choice.  Or just a nice long nap in the A/C.

Fireworks, sadly, are by far the most popular means of celebrating independence days around the world, but after much digging I did find a few more sedate ideas that I’d like to bring to your attention.

Did you know for example that in India the symbol for independence is a kite and so they fly kites for their Independence Day?  Tell me that people spending the day serenely flying kites over a lake isn’t better than drunk people blowing off their own fingers.

In Indonesia they celebrate by attempting to shimmy up a greased palm tree. I’m not going to run out and do this but I would be fine if it took off here instead of fireworks.  In Cambodia they celebrate liberation from French rule by releasing thousands of brightly colored balloons into the sky.  Another win.

South Korea it seems has an odd tradition:  they celebrate their victory over Japan and subsequent independence by setting prisoners free which is kind of a literal interpretation but, hey, still better than fireworks if you ask me.

Every year though I’m reminded in no uncertain terms that I’m way out of the mainstream on this, so this year I’ll celebrate the holiday the way I always do: with earplugs, alcohol and a good book. Happy Fourth!