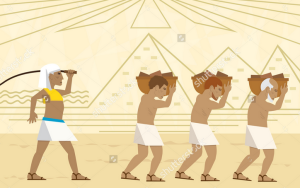 Shakespeare was half right when he said all the world’s a stage.  What he forgot to mention was that the world’s a stage and we the players but we’re mostly just starring in a revival.  For the four thousand years of recorded human history we’ve pretty much been playing out the same sordid drama over and over.

I first read of the concept of the hydraulic despotism in the works of historian Arnold Toynbee who did not coin the term but wrote compellingly about it. As soon as humanity left behind the hunter/gatherer way of life in favor of agriculture, it became necessary to control water distribution and to stockpile grain and crops and other resources.

A class of despots arose who claimed divine rights to the lion’s share of these resources and a priestly class arose who backed up their claim. It was also necessary to protect the resources from marauders and so the soldier class arose.  For the first time we donned our roles and not much has changed ever since.

The agrarian revolution was certainly a great thing in many ways.  It allowed for specialization which brought technological improvements and a class of professional artisans, doctors, philosophers and more, but we’ve never gotten over this idea that some people deserve more of the resources than others. It has, in fact, haunted civilization from the beginning.

In hunter/gatherer times if an individual were a selfish asshole, he could smash someone on the head and take his nuts and berries sure, but he had limited power to affect the group as a whole and the group always had the power of casting him out which in most cases was certain death.

There is a thought that human history is on a divine path from the muck of our beginnings through the various seismic shifts of agrarianism, industrialism and now technologism (which sounds kind of weird but is in fact a word, and not a dirty word either.)  But where does this path take us?

At the moment our greatest resource, money, is mostly invisible and psychological in nature. People get rich, and poor, merely by speculating on psychological reactions other people will have to various and sundry phenomena, many of which were manufactured to have the desired effect. The hydraulic despotism still exists but it’s now an economic despotism.

As recent political movements have shown, people are aware of this and unhappy but we have a new priestly class in propagandist media and their message is powerful, constant and, as it was in the past, meant to keep Pharoah in control.

I don’t call for a revolution because revolutions are never successful in the long term, merely another act in the drama.  Instead I wonder how we shift people’s focus from shortsighted accumulation of power and resources and instead onto the only thing that matters in a reality in which your individual self is fated to die: helping other people.

In the meantime another act in the drama plays out.  Again…