The Casa Mas de Miquel in Barcelona is a striking building on the Avinguda Diagonal in the heart of the city.  Designed by Domènec Sugrañes i Gras, one of Gaudí’s protegés and the man entrusted with finishing the Sagrada Familia after Gaudí’s death, the building combines Gaudí’s modernist style of windows with classicist pillars and features a stunning tiered oval courtyard capped with an ornate, highly decorated cupola.

I first saw the building in a brochure in July when I visited the Open House Barcelona office to talk about a musical collaboration and, even looking at it in a black and white photograph, I knew that if they agreed to the project, this was the building I wanted to write music for.

As it happened they agreed and I wrote a piece for violin and cello to be performed in the courtyard on the day of the event, October 23rd, a day which I consider to be the highlight of my artistic life thus far. 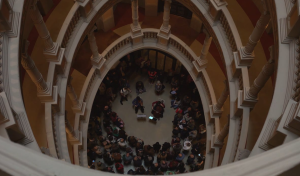 The building had recently been converted to private residencies and a lot of people wanted to get a look inside it so the line went all the way down the block and around the corner.  The managers allowed 140 people to come in at a time.  The Open House volunteer told them about the architecture and then introduced me and I talked about the project and my music and then the musicians performed the piece. 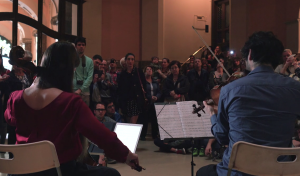 When it was over everyone hung out for a bit taking in the space and then they were ushered out and another 140 people were ushered in and we started it all over again.  In all well over a thousand people heard my music that day and the responses were wonderful.

I was really moved by the concentration that the audience gave the performance and by the conversations I had. I remember thanking a woman for coming and she said to me, “no, es un regalo” or “no, it’s a gift.”

The day was magical for me because not only was my music being performed in an incredible space for oodles of appreciative people but also because it was happening in Barcelona, a place for which I’ve long had a fascination. 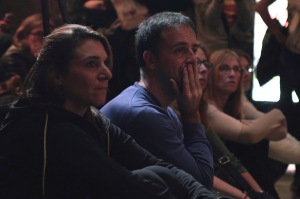 After the final performance the musicians and I had lunch in a nearby cafe with the videographer and a few others.  We talked in a mixture of Spanish, Catalan, English and German and I felt like I was in heaven.

I spent nearly three months of 2016 in five different European countries and, there as well as in the U.S., I heard the same thing.  Close the borders, expel the foreigners, bring back outsourced jobs, preserve our cultural heritage. I don’t know where it’s all heading but I do know that travel, language study and international projects have enriched my life incredibly and opened me to all kinds of different ways of seeing the world.

The new year is a time of hope and I have a very sincere hope that we won’t let fear get the better of us this year and in the years to come.  I like cultural diversity and I like the idea of a global village in which we recognize the humanity in others and I hope we get there.  In the meantime I’ll always have that magical day in Barcelona.