The Super Bowl and Dionysus

I was talking with some friends about the upcoming Super Bowl match, which I’m not particularly excited about, and we were talking about the half time show and I said, “I think they should perform a full Greek tragedy for the half time show.  Euripides’ Medea for example would make for great viewing.”   The game stops, everyone gets their beer refilled, grabs a hotdog and then buckles in for two hours of show stopping, poison your kids to spite your husband style ancient Greek tragedy, complete with the Greek chorus of course.

We all had a laugh at the thought and the conversation turned to other things but I was thinking of Greek tragedy the next day and, although the super bowl may never be the appropriate place for it, I was thinking of resurrecting the idea.  Early Greek tragedy was commissioned for an annual religious festival in honor of the god Dionysus and the plays contemplated the “big themes” of humanity.  Honor, love, death, fate, free-will, etc. 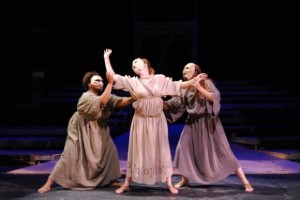 I’ve been thinking for a long time that I’m not totally satisfied just producing concerts of music. I’ve been looking for something that would be more far-reaching and intellectually satisfying and the idea of a kind of Greek festival really appeals to me.  Assuming there were money for something like this, I’d commission artists, playwrights, choreographers and musicians to make works of art that are updates on the questions asked by the famous playwrights of old.

It would be a five day event and, though it would not commence with the sacrifice of a bull as the Greek festival did, I’m sure we could find something equally fun to kick it off.  People would be entertained but they would also be challenged to think about what they saw and heard.  In ancient Greece the tragic conflict is often between hubris or rash behavior and the order laid down to man by the gods, or it is a prophecy that foretells some horrible thing that the participants cannot escape.

But always it is more than the sum of its parts.  A Greek tragedy is never about what it’s about, to paraphrase Roger Ebert, but is instead meant to provoke questions. Do we have free will? Is there a natural order or behavior that man must comply with or risk punishment?  If not from the gods then from other humans.  These are the questions that my quasi-Greek festival will explore.  Once I get the funding and get it up and running of course.  I’ll put it on the to do list and we’ll see when it happens…