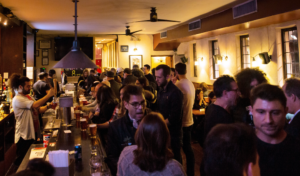 Last Monday was the annual membership meeting for the American Music Center and, as I have done three out of the last four years, I flew to New York City from Chicago to be there. I’ve gone out of my way to be at these meetings because I believe in the AMC and like to know what’s going on, but also because I like going to New York and because spending lots of money on really small hotel rooms makes me happy.

The meeting this year was a great opportunity to meet new people, hear musical performances, support the award winners, and catch up with old friends, both at the meeting and, as per a long-standing tradition, after the meeting at a nearby Irish pub called the Half King.

The Half King is a bustling pub on West 23rd Street filled with people drinking, talking, eating and, as a rule, listening to rock music. Or, at least there is always rock music on in the background. I know that it’s impossible for me to go anywhere and not notice the music that’s playing, but I’ve always suspected that this is not true for most people and, at the Half King, I had a chance to see that for myself.

About halfway into the night my friend Ewelina noticed that I had a CD and asked me what it was. I told her that I had gotten it from a composer at the meeting and that it consisted of several pieces for orchestra and Chinese traditional instruments like the erhu and pipa. Ewelina then said that she would buy my dinner and drinks if I could convince the bar to play the CD and let the piece run for 13 minutes.

I couldn’t say no to that. I didn’t think it would actually happen but it sounded like too much fun to turn down, especially as I had not heard any of the music before and so had no idea what to expect.

I began my crusade by getting our waiter on our side. He seemed to think this a welcome departure from the normal Monday night rush hour and agreed to help immediately. He and I approached the bartender and asked him if we could play the CD for 13 minutes.

The bartender was a surly little dude who asked me what the music was. “It’s contemporary classical orchestral music by a Chinese composer,” I replied innocently. “We only want to play it for 13 minutes. Look at these drunk people! They won’t even notice.”

Unfortunately he disagreed and said he wouldn’t play the CD because he thought people would flee the bar in droves. Arg. I do like free drinks though, so I was not about to be deterred so quicky. I decided next to talk to the bar patrons themselves and get them on my side. I approached a large group of people standing at the bar and asked if they liked the music that was playing. They looked at me like I had asked if they had met the alien perched on the bar.

“The music? Yeah, I guess. It’s fine.” “Are you familiar with contemporary Chinese classical music? It often blends elements of the western classical music tradition with their own storied tradition in fascinating ways,” I said. This didn’t go over so well so I changed tactics again. “I want you to tell the bartender to play this CD and let it play for precisely 13 minutes.” This they agreed to readily. I’m not really sure why, but they did.

Having now secured the support of nearly half the people standing at the bar, I went back to Surly and promised him that the patrons would not leave. “They won’t even notice,” I insisted. He looked at me, he looked at the waiter, he looked at the drunken mob in front of him.

Everyone wanted to hear the CD. He caved and put it in. “If I personally hate this music, it’s coming right the f**k out,” he warned me. “I would expect nothing less, my good man,” I replied. I returned to the table and told the tale of my success. Ewelina reminded me that 13 minutes was a long time…

The CD started and for literally the first full minute we couldn’t hear a thing. It was a quiet beginning and the bar was loud. Fortunately Surly got busy and seemed to forget about the whole thing and no one else noticed that there was no music on.

Then suddenly the music swelled. Loud percussion and strings came in with occasional puncuations in the chimes. I immediately got nervous and looked around the bar. “This is not normal Irish pub music,” I kept thinking to myself. Nobody seemed to notice except the drunk people I had originally talked to. They were now openly mocking me. Again though, the bartender was too busy to notice and the CD played on.

4 minutes. It got quiet again and we couldn’t hear anything for another minute or so. No one noticed.

6 minutes. Loud percussion now with a distinctly Chinese traditional sound to it, Again I got nervous and looked around. Again no one noticed. Even the bartender seemed resigned at this point.

8 minutes. Hard to hear the music again. Lots of chimes. The drunks were not mocking me anymore, they seemed to have forgotten everything and gone back to their conversations.

11 minutes. The bartender walked over to the stereo. I immediately jumped up and ran over to him. “Just two more minutes!” I beseeched him to let it play. “Ok, but this s**t is seriously rubbing me the wrong way,” he replied.

12 minutes. Pretty much nothing but silence at this point with an occasional chime. No one noticed.

13 minutes. The dude must have had a stopwatch because he seriously went and cut it off at exactly the 13 minute mark. Rock music started to play again. No one looked up, no one commented, no one noticed.

Ewelina lived up to her end of the bargain and bought my drinks and dinner, but the whole experience was a bit strange. Somehow it didn’t exactly feel like a victory for contemporary classical music. Or for music of any kind for that matter.