Finding a Social Message in Music 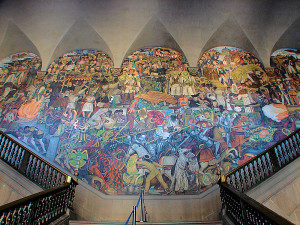 I’ve been told numerous times over the last fifteen years or so that I spend too much time promoting the music of other composers and building ACM and not enough time writing music and getting it performed, and perhaps that is true.  But for whatever reason I’ve always felt highly compelled to continue doing all of these things even though opening storefront music schools, planning concerts, creating a global composer membership program and hosting a weekly radio show, among other things, on the surface has nothing to do with the act of ordering sounds.

I’ve always wondered about this compulsion in myself.  In fact there have been times when I’ve been alarmed at how satisfying it is for me to produce an event like Open House Chicago or Sound of Silent Film Festival and I worry that if I’m artistically satisfied from producing these events, that don’t necessarily include my music, then I won’t have the need to create music.  And I can’t imagine my life without creating music.

But as I was in the Presidential Palace in Mexico City yesterday looking at that incredible mural by Diego Rivera and hearing a tour guide – I’m a big fan of glomming onto other people’s tours – talk about how to the Mexican people Diego Rivera is an important artist for his social message as much as for his skills as a painter, it occurred to me that I attach the same kind of importance to social message that he did but have always struggled to know how to express that message in music.

For me the message is not about injustice or politics or anything like it was for Diego Rivera, I’m not exactly going to sit around and write revolution songs.  For me the message is simply that music, and art in general for that matter, is important.  I don’t feel that I can simply write music and get it performed for small audiences of new music enthusiasts and be happy with that.  That’s partly my ego, wanting to appeal to a larger audience, but it’s mostly a deeply held conviction that has not gone away lo these fifteen years or more, that if we can train people in how to experience music, it will enrich their lives and nourish their souls. I’ve seen it firsthand too many times over the years to not believe that it’s true.

This means that I’m not quite the composer I dreamed I would be when I was in my twenties, gadding about from performance to performance, giving lectures and writing music in fevered bursts of inspiration.  I do write music in fevered bursts of inspiration but I also spend a lot of time carefully planning projects that will bring the music I love to more people, and then bringing those projects to life.  To me that’s no different than imagining a piece of music, writing it down and then bringing it to life in a performance setting.

As I stared at the mural, oblivious to passing time, it struck me that everything is ok.  I’m doing exactly what I should be doing.  I’ll never stop writing music, even if the other activities mean that I won’t write as much and it will take longer for it to get known, but I felt a profound confidence come over me that everything I’m doing is part of who I am as an artist.

I’ve been thinking that ACM and Relevant Tones were separate from writing music but they’re not.  For me, everything I’m doing is part of my life as an artist. Whether it’s music, an event, a radio show, a global network, what have you, my art is bringing what I see and hear to life and I don’t have to search for a social message. It’s already there.