Growing up in Jefferson City, Missouri was not quite the Tom Sawyer-esque adventure it probably could have been though this is entirely my fault as I could never bring myself to jump into the Missouri River or even to wade into the mud along the shore.  I also had no idea how to build a raft and I look terrible in a straw hat. I did spend a little over a year barefoot though so hopefully that counts for something.

At any rate, my friends and I mostly spent our teenage years escaping to nearby Columbia to see what we thought were punk rock shows.  Then, when we got more adventurous we started driving to St. Louis to see bands with actual punk cred like Danzig. On one such trip my friends learned that I had never been to the top of the Gateway Arch and it was decided that this must be rectified immediately.

If you haven’t done this then I have to say that it is a singular experience. The arch was designed and built long before accessibility was a buzzword in architecture.  The elevator is a miserable, cramped affair in which you’re forced to sit staring in uncomfortable silence at the people across from you as it, suspended from above by a cable, sways back and forth on its creaky, painstakingly slow way to the top.

Once the elevator is done there are still like a hundred stairs until you get to the observation deck and then when you recover your breath you notice that it wasn’t just the elevator that sways, the entire building is literally rocking back and forth with the wind. When you recover from this shock though you see the view and it’s pretty fabulous. Though I only went up into the Arch once, I’ll never forget the sight of the Mississippi river snaking off into the distance.

It was only years later that I learned that the Arch was designed by Eero Saarinen and that he was a total badass. I’ve been fortunate since then to be able to visit several of his most famous buildings including the MIT Chapel, Kresge Auditorium and the Miller House and Garden in Columbus, Indiana which if you haven’t gone to Columbus you should plan a trip because this town of 47,000 people has a truly scary amount of world-class architecture. There’s even a film about it on Netflix.

I’ve never had the chance to visit one of his most famous buildings though because until very recently it was closed.  I’m talking about the TWA Terminal at JFK airport.  As you may know ACM likes to commission composers to write music inspired by buildings and we’ve been fortunate enough to put musicians in some pretty fascinating places in Chicago, Milwaukee and Barcelona over the last few years.

I’d been wanting to do something with Open House New York for the last four years but it was a tougher nut to crack. But when I heard that the TWA Terminal is being reopened as the ultra-swanky TWA Hotel I went back to them with a proposal.  What if we work with four composers to write music for the opening?  As it turns out Open House New York is holding their annual gala there and they decided this would be an amazing addition.

Tomorrow night I and three other lucky composers will have our music performed in the soon-to-be iconic Sunken Lounge.  All four us wrote pieces inspired by a different aspect of the building, Saarinen’s life or the history of the structure which wasn’t always rosy.  In fact it was almost torn down at one point after Carl Icahn ruthlessly gutted TWA in the ’90’s.  We have a videographer so I’ll be sure to share videos next month but in the meantime here are some photos of the space.  Excited! 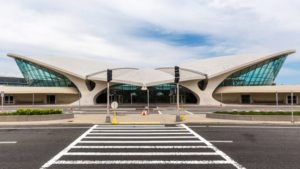 They left the outside of the building exactly the same as the original design.  Saarinen said that he sought to capture the sensation of flight in all aspects of the building. I’d say he got it done. 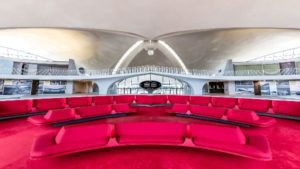 This is the Sunken Lounge where our music will be performed for 450 or so guests.  I’m not sure what kind of music they normally play in there but hopefully it’s early Moby. 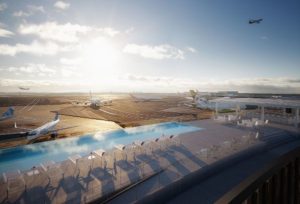 Rooftop infinity pool overlooking the runway!  What!?! I’m absolutely taking a dip tomorrow rain or shine.  Even if there’s a lightning storm I’ll be in that pool. 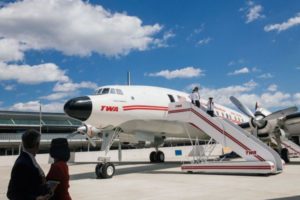 This vintage TWA jumbo jet has been converted into a cocktail lounge. I’m pretty sure the people in this photo are not real though.  Just sayin’. 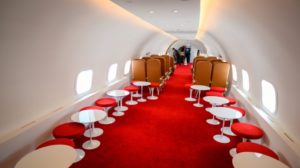 Just in case you don’t believe me, this is the inside of the jumbo jet cocktail lounge.  Obviously they’re playing the Steve Miller band in here.  What else would you play?