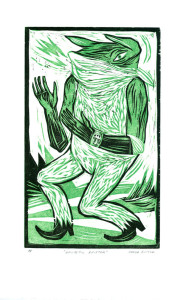 Working on the last of the three movements of my new work, now titled Inner Visions, inspired by the art of Sanya Glisic.  This one is called Galactic Drifter and I absolutely love it.  Who is this guy? What worlds has he visited?  As I did for the other paintings I kept a series of journal entries to help me sort out what the work means to me and how I can represent it musically.  Here are my thoughts on Galactic Drifter.

Or are those obscuring lines over his body? I like the way those lines become color-inverted in the rest of the piece, what was green is white and vice versa.  He’s wearing some kind of watch or intergalactic travel device. Yes, that’s a chronometer that he wears that also has the power to transport him through space and time.

And he has sharp looking boots on, he’s a sharp dresser in general.

Prophets of tomorrow – like an imaginary tarot card. He dances like a devil, looks like a devil or a death card that signifies change.  He has his hands up in the air palms out which signifies …?  Not sure.  His face is like a cross between a wolf’s and a crocodile’s and again, like all of her characters, he is a sharp dresser.

What to do musically?  Something kind of sneaky but plaintive too, must be lonely drifting around the galaxy like that. I think there will be a sax solo, not sure why but it just seems right.  Shouldn’t the galactic drifter have a lonely sax solo?  Yes, I think so.  Mostly pizz in the cello, sneaky kind of bass line, perhaps somewhat bluesy.