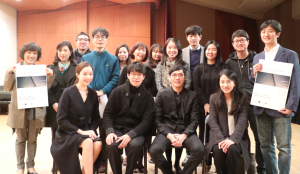 For years I’ve described ACM as a global organization, a network of composers, performers, audience members and students.

We’re not quite to the level that I want to be at but tonight we took a major leap forward.  ACM composer members from the U.S., South Africa, Scotland and Germany had pieces performed in Seoul.

On November 6 ACM’s resident ensemble Palomar will perform works by Korean composers at the International House at the University of Chicago. This is the beginning of what I hope will be a continuing, fruitful cross-cultural exchange of music.

Videos will be posted from both concerts very soon!