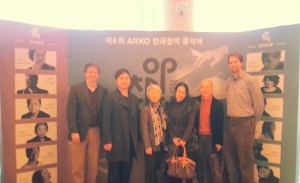 Well Korea is the gift that just keeps on giving.  I’ve been here now for nine days and it’s been a non-stop whirlwind of concerts of traditional and experimental music and dinners and lunches with interesting composers, performers and impresarios.  Yesterday I met with the public relations manager for the Korean National Composers Association and planned a very interesting collaboration with Access Contemporary Music

For years I’ve wondered why there was no global composer membership program or entity promoting contemporary music on a more than regional basis.  There’s the American Composers Forum and the East Asia Composers League and so many more, all of them promoting music of regional composers.  But to whom are they promoting this music?  With what aim in mind?  Presumably other people interested in contemporary music in those regions already knows about the composers and the organization.

Why not promote the music outside of your region and help new audiences around the world discover new music by living composers in different countries?

This is exactly what I want to do with ACM and have been working toward for so many years, (turns out it’s harder than you might think to get this going…)  This partnership with the Korean Composers Association is the first step.  We’ll be able to get their composers heard in the United States and also by our composer members around the world and they’ll perform music by our members from other countries in Korea.

In addition we’ll gain several new members from Korea which will give us a much more significant Asian presence than we’ve had so far and we hope to create a successful model that can then be brought to other composer associations around the world.   I’m thinking that instead of calling this ACM’s Composer Membership program which is a pretty nondescript and boring name, we’ll call the program Global Connections.  That’s exactly how I’m thinking of it, a network of connections between composers, performers, audience members and music students around the world with the goal of creating, disseminating and appreciating creative music.