Hans Fallada and the Importance of Tolerance 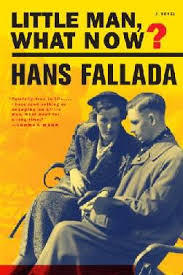 I’ve just finished reading Little Man, What Now? by Hans Fallada and it’s an absolutely chilling novel, partly because of its story and partly because it shows so clearly how easy it is for fascist ideas to take hold in the human mind.

Set in Germany in 1933 right before Hitler’s rise to power, the book is the story of an average working class couple trying to make their way in a small town and, later, in Berlin while gradually being enveloped in the shadow of the awful events to come.

What makes the book so powerful is the way that we understand the early sympathizers to the Nazi party.  Everyone is angry, everyone wants a scapegoat.  At first the scapegoat is authority itself, the political party in power, but later, as everyone knows, it is ethnic groups, gays, people with different religious beliefs and then, ultimately, even other Nazis themselves.

Because there’s no way to stop the process of hatred once you give in to it. Once you declare someone to be “other” and persecute them you have started an inexorable process that destroys everything in its path.  It’s a horrific cliche to compare modern day politicians to Hitler and that certainly isn’t my intent.

But there is a disturbing tendency in American politics to declare a particular group “other” and try to strip them of their rights.  Even if it were possible to do this, and thankfully I believe that we’ve progressed too far for it to be easy, it is a dangerous path that leads only to paranoia, suspicion, divisiveness and ultimately war and suffering.

Books like “Little Man” are so important as they show us clearly that we’ve walked down this path before and it is not a path any of us wants to walk down again.