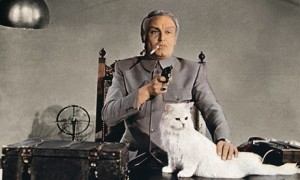 Close your eyes for a moment and picture this familiar scenario: A super-villain is sitting in a high-backed chair, fiendishly stroking a kitten while he tells a momentarily incapacitated super-spy and a handful of hapless goons his current plan for world domination. What music is he listening to as he does this? That’s right, he’s listening to classical music.

Given that this is one of the enduring images we who have chosen this field have had to deal with at least since Wagner, how disappointing was it to open up the newspaper the other day and read that that arch-villain Vladimir Putin had decided to put on an open-air classical music concert in war-torn Syria featuring his good buddy and fellow one-percenter, and also decidedly mediocre cellist, Sergei Roldugin.

I was eating tacos at a great new spot in Uptown when I read this and I actually turned to the guy next to me, shaking the paper in such a way that he couldn’t possibly read it, and said, “Do you believe this shit?!” Naturally he moved to the other side of the restaurant, but I was too distracted to notice. I mean here we have Hitler, at least half of the James Bond villains, Gary Oldman’s character in “The Professional” and Alex DeLarge from “A Clockwork Orange,” just to name a few—and now Putin too? It’s too much.

Obviously we’ll never overcome the image of classical music as the genre of choice for super-villains, but still I’d like to respectfully ask a favor. If you’re a super-villain and you’re thinking of trying to legitimize your recent bombing campaigns by having a concert on a historic landmark, for Pete’s sake call Yanni.