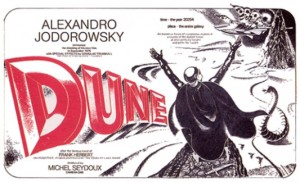 I recently watched two excellent documentaries, Jodorowsky’s Dune and Woody Allen: A Documentary, within a week of each other and it really got me thinking about the contrasts between these two personalities, not only artistically but also in their working styles.  There’s an interesting polarity in their approach to creating art.

Jodorowsky is obsessive, consumed with the idea of making the perfect movie version of Dune.  He’s so obsessed that he absolutely won’t settle for anything less than perfection. He forces his son to train with a sword intensively for two years for the role of Paul Atreides, insists on working only with major artists like Salvador Dali, Orson Welles, Pink Floyd and Mick Jagger, his production budget balloons out of control and ultimately the project is given to another director and the movie is never made.

Woody Allen, on the other hand, gets up every day and writes a screenplay and, when that’s finished, he directs the movie and has made a movie a year for most of his long life.  He doesn’t do the casting himself, he seldom gives direction to the cast, he often only does one take of each scene and he’s the first to admit that he doesn’t worry overly much about quality. If the film is good that’s great, if not then it’s on to the next one.

There’s something very attractive to me in both qualities.  Of course I love the Jodorowsky level of obsession, the manic gleam in the eye and the strict refusal to compromise your artistic vision, but I also like Woody Allen’s workmanlike approach to creating art. There’s something amazing, and very freeing, in the idea of getting up each day and creating art and letting others decide if it’s any good or not.

Jodorowsky embodies the old school idea of the crazy, passionate artist so it’s somewhat ironic that his masterpiece was never finished.  And of course if it had been finished it could never have lived up to the vision he had for it.  The breathtakingly audacious vision he had for this is the art, the reality could only have been a letdown.

Woody Allen, on the other hand, isn’t afraid of the inevitable letdown of making a vision real, creating a material copy of the perfect vision in the artist’s mind.  This idea of bringing an artistic vision into the world fascinates me because it can only suffer by being made concrete, you lose so much in the translation from mind to reality, but at the same time that’s what being an artist is.  Everyone has great creative power, few go through the tortuous process of trying to express that creativity in the form of art communicable to others.

Jodorowsky’s reach well exceeded his grasp and his great film was never made, but the story of his vision is incredibly inspiring.  There’s very little inspiration in the vision of Woody Allen but his best films are wonderfully moving.  Does it matter if that happened accidentally?  Does it matter that there are three times as many bad Woody Allen films as good ones?  It’s an interesting contrast.