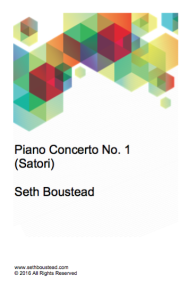 It was a gorgeous day in Helsinki in August of 2014 and I was sitting outdoors at a pub drinking a ludicrously expensive bottle of beer and thinking about what kind of music I wanted to write next.

I was convinced that all of this breathless careening from project to project was not allowing me time to think about what it was I wanted to say as an artist, that I was too busy meeting deadlines to do the really hard self-examining that an artist must do if he expects to ever say anything of value.

Somewhere in the middle of my second beer I decided that the perfect thing for me to do was write a piano concerto. I could tell that it was the perfect thing to do because I immediately got very nervous.  My heart fluttered and I felt shaky, which for me is always a clear sign that I’m on the right path, or that I need a third beer.

I got to work on the piece right away but as it turns out nearly everything I wrote in Helsinki was garbage and the only thing I kept was the opening figure in the piano, a kind of menacing, rhythmic figuration that you’d typically hear in a movie when things are about to go really bad for someone. (Don’t worry though, it all works out in the end.)

I didn’t find the real inspiration for the piece until a few months later in a conversation about art with friends. I was talking about my obsession with writing in my own language with as few outside influences as possible.  Meanwhile I had sketched another movement that was meant to sound like it was me improvising at the piano and one of my friends said the piece was a self portrait. I liked that idea and ran with it.

I called the piece Satori which is this wonderful Japanese Buddhist term that can mean self-knowledge, the search for self-knowledge or one who has attained self-knowledge. The finished work is in four movements and it’s getting performed for the first time next week by the Chicago Composers Orchestra with the wonderful Marta Aznavoorian as soloist.

Anyway, here are the details in case you can make it.   I’ll post videos too shortly after the performance.