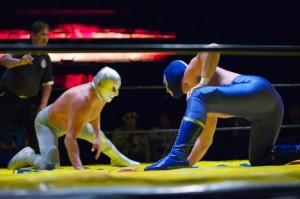 Before coming to Mexico City this time, the only thing I knew about Lucha Libre was the mediocre Jack Black movie where he goes from a monk to a Mexican fighter.  But Jesse, the producer of Relevant Tones, wanted to go and so did several people staying with me here in the Spanish school so… why fight it?

I had kind of a bad attitude going in, I was thinking it would be really cheesy and predictable and not a lot of fun but it was actually a blast.  They’ve been doing this for a long time, much longer than American wrestling, and they really know what they’re doing.  Most of the time I was trying to shut my brain up and just enjoy the show but, being who I am, I couldn’t help but relate it back to music and radio once in a while.

You see, the dramatic pacing of each match is perfect.  Some of the moves are planned and some of it is random but they always know how to give the crowd a good time and I was thinking that if we can transfer that to every radio show we do, or if as a composer I can translate that to every piece I write, the same success can be had.

I had a composition teacher who talked a lot about the “dramatic arc” of a piece of music. She would make a tension graph as she called it, where the X axis was time and the Y axis was intensity and then we’d all plot out our pieces on the graph.  If the most intense moment was two minutes into the piece and then you had ten minutes of quiet, perhaps your tension graph needed a little work, perhaps it would not be an interesting piece.

And that’s what these spandex-clad wrestlers are so adept at.  There was never a climactic moment that couldn’t somehow be topped and there were a myriad ways of topping it.  A guy in a pin would miraculously turn the tables on the other guy, more fighters would appear out of nowhere, they’d obey the ref or disobey him as needed to create tension, they would fight outside the ring, they’d form alliances and betray each other, it was incredible.

My favorite moment was in a tag-team match and one of the guys was getting pummeled.  His partner was pleading with the ref to let him go in and help but the ref would not allow it. This was all done with oversized gestures of course, but it worked perfectly. The crowd was on its feet imploring the ref to let the guy help his friend but no, he couldn’t help and the match ended in their defeat.  The crowd was enraged but they were also thoroughly engaged.

Now we can’t resort to things like this in classical music and radio needless to say but we can use the same types of techniques to ratchet up the tension when we need to.  In music it’s not just getting louder or adding more instruments.  A skilled composer can create a claustrophobic feeling of great tension through repeated pitches, frustrated resolutions, unresolved suspensions, etc.  In radio it’s all done with modulation of the voice.

Either way it’s something I want to make sure I’m thinking about and I hope that someday I can master the art of creating and dispelling tension as adeptly as the Lucha Libre wrestlers.  Of course maybe we could take another page from their book and try having huge cups of cheap beer too.  Couldn’t hurt!