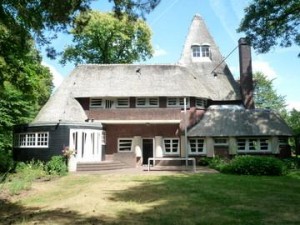 For three years a young man by the name of Walter Maas was hidden in the eaves of this house in Biltholm, Holland by a brave family during World War II.  Maas, who was twenty-three when he went into hiding, was a Jewish refugee from Germany lucky enough to have family friends willing to safeguard him.

After the war was over and he was able to come out of hiding he, overcome with gratitude to the family and the Dutch people generally, started the Gaudeamus Festival in the same house to promote the music of young Dutch composers.  Today, nearly seventy-five years later the Gaudeamus Festival is going strong and has expanded into an international powerhouse.

It’s an inspiring story and I think especially poignant for the Americans who are here. We are one of the few countries on the planet never to have experienced a foreign invasion. For us the world wars are remote affairs seen on television or quickly brought to heel by John Wayne but, in Europe, even today, the reminders are everywhere.

As the Dutch scholar Erasmus has said, “war is delightful to those who have had no experience of it.”  Well maybe delightful is a bit of a strong word in this case but, as the U.S. and other countries continue to beat the nationalistic drum, it makes me nervous.  Nationalism is the first step toward identifying the “other” which is a slippery slope of mistrust that leads to misunderstandings, dehumanization and ultimately to war.

I was so moved by the story of Gaudeamus’ beginning.  Imagine if that family had not had the courage to take in Maas?  We would have lost an international music festival of great renown but, more importantly, we would have lost a human life.  Kudos to that family for recognizing a fellow human and for having the bravery and compassion to do the right thing.

Gaudeamus is Latin for “let’s be merry.”  It’s amazing to me that, after a three-year ordeal of constant fear and privation, Maas not only had the energy to start a festival but also gave it such an optimistic name.  Let’s be merry indeed, and recognize the humanity in all of us.