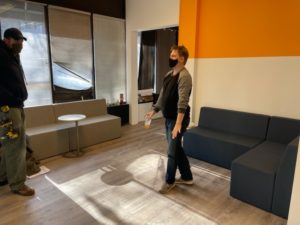 I find myself thinking about space a lot lately. There is the space of my apartment with which I have become intimately familiar these last eleven months and counting of course.  But there are three spaces in Chicago I think about every day too.

They are the three locations for our ACM School of Music, now empty spaces.  One of them has become a repository for all of the stuff we don’t know where else to put.  Another is still somewhat busy as one of our wonderful teachers is there all by his lonesome teaching virtual lessons.

And one of them, the first one I opened fourteen years ago on Wilson Ave., is in a kind of chrysalis.  Or at least that’s how I think of it.  Like it’s sleeping right now and, once the loud men are done with their constant hammering and sawing, it will emerge in the spring as a beautiful butterfly.  Yes, it’s a deep sleeper.

I envisioned a kind of thriving community music hub when I opened the storefront back in 2007.  ACM was doing a project called Weekly Readings back then and I loved the idea of rehearsing and recording the new pieces each week in the window of a storefront.  I wanted music-making to be normal, as normal as anything the other businesses on the block did.

Though in retrospect, considering that the other businesses at that time were a shady tax guy, a chain-smoking dry cleaner and a corrupt chamber of commerce, maybe this wasn’t what we wanted to emulate. Today the other businesses are a sushi restaurant, a European clothing store and a math tutoring place, none of them corrupt so far as I can tell.  Incredibly, we’re now the oldest business on the block.

I started teaching a music composition class in our new space in the fall of 2008.  ACM musicians would come in on the final night of class to play the student works and then we’d drink wine and gush about music, art, life, all the good stuff. I was so happy.

Then the mortgage crisis happened and the Illinois Arts Council was gutted. We lost what little donations and other grants we were getting as well.  But now we had a monthly rent obligation and so we had to come up with another way to bring money in.

Composition lessons were so fun to teach but were never a best seller so I started teaching piano in the window.  After a few months my schedule filled and I hired another teacher. Then another and another.  The corrupt chamber of commerce went out of business and we expanded into their space.  A hair salon on the corner came and went and we expanded into their space.

We had been saving money for years to remodel the space when Covid hit.  At first we were nervous to move forward with the plan.  Now I know that we could never have done it without Covid. There was no way we could have closed the school for the six months and more it’s taking to complete the project.

The new design features teaching rooms equipped for virtual learning, a small performance space (in the window of course) that doubles as a recording and livestream studio and, the thing I’ve been talking about for so many years, a small coffee bar in the corner space with, in a nod to the old days, a secret cache of wine.

Everything about the new space is meant to foster community around music-making.  We’ve got another month or so of work and then another few months of siting empty most likely.  But eventually this beautiful heavy-sleeping butterfly is going to emerge. I can’t wait until that day.