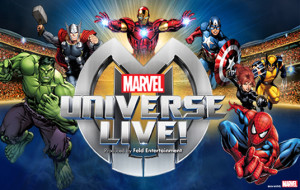 I saw this ad on a bus recently, a Marvel Universe Live tour that is apparently selling out huge arenas around the country, and it made me long for the purity of the 1950’s.

Not the Polly Anne-ish purity that right wing politicians are always going on about, the forgotten glory age of Norman Rockwell America that they are forever trying to bring back.  No, I’m talking about the glory age of pessimistic Science Fiction in which humanity was repeatedly bested by all manner of aliens, robots and natural disasters brought about by our own stupidity.

It’s no secret that popular movies mirror popular fears and angst and there are many studies that make a convincing case that the proliferation of Science Fiction movies in particular during the 1950’s was a direct result of the successful testing of the A-bomb in 1949 by the Russians thereby arming our hated enemy, ushering in the Cold War and bringing the threat of nuclear annihilation shockingly home to the public.

These were fears that nearly everyone shared.  Even the Cunningham family from Happy Days built a bomb shelter.  According to writer Victoria O’Donnell “these fears were expressed in various guises, such as aliens using mind control, monstrous mutants unleashed by radioactive fallout, radiation’s terrible effects on human life, and scientists obsessed with dangerous experiments.”

This is nothing new of course.  Books published during the various plague epidemics preyed upon and played to the same kinds of fears but nothing really tops seeing your fears brought to life in a big budget Hollywood movie and we’ve been addicted to it ever since, but with one important change: the superhero who prevents the cataclysm from occurring or at least mitigates its worst effects, and often falls in love and hawks a product while doing so.

Buck Rogers and a few other hero epics aside, most of the films from the 1950’s are disaster epics where the earth is destroyed and humanity is obliterated, irreversibly altered or forced to send a group of cryogenically frozen survivors blindly into space hoping they can restart the race on some hospitable planet in a few hundred thousand years.  And that’s a good thing!  People should get a nice dinner in a restaurant and then see their entire way of life destroyed or warped beyond recognition because of the stupidity of their race.

In today’s superhero movies, though there is often considerably more psychological depth, there is never really a feeling that anything is at stake. The terrorists, super villains, machines, etc. will be bested in an exciting scene that has just the right amount of shaky cam or CGI delivered incomprehensible action, witty repartée and maybe a quick upskirt or nip slip.

Hollywood just can’t bring itself to destroy us anymore.  Instead they manufacture a cozy false existence filled with superheros that would have been a sinister parallel dimension in the 1950’s.  You can just picture a Twilight Zone episode in which the populace is lured into a false complacency by an alien-controlled movie production industry and then destroyed at their weakest moment.

If you truly want to save the human race, I implore you to make a movie in which the superhero dies and all of humanity is lost!  It might shock us out of our complacency.  Or at least it would be something different.  Also, no shaky cam!