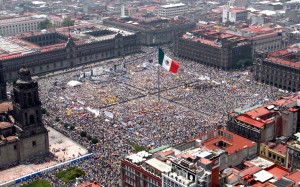 Tomorrow I leave for Mexico City for 15 days!  The plan is to study Spanish at the Frida school for four hours a day and then work on ACM in the afternoons and make two shows for Relevant Tones about the contemporary music scene there.  I’m also going to get some composing done and hopefully do some tourist things as well so it should be a busy trip!  I’ve been to Mexico City twice before, once for a vacation with my wife Maria and once in 2009 with ACM when we were working with stellar composer Gabriela Ortiz.  Gaby wrote a new piece for us called De Animos y Quebrantos and it has been one of the most popular of our Composer Alive commissions.

We recorded the fourth installment of the piece under her supervision at UNAM, I gave a presentation to her composition seminar and we met a ton of great composers and musicians.  I’ve always remembered what a vibrant scene it was and so, now that Relevant Tones has syndicated internationally and we’re looking for more global content, I remembered Mexico City and wanted to go back.   We have interviews set up so far with Gaby, her husband Alejandro Escuer who is the flutist and founding member of the Onix Ensemble and with legendary composer Mario Lavista.

I know we’ll meet a lot of other great composers and performers too.  Should be a great two shows, look for them some time in May 2014.  Quick funny Mexico story.  That picture above is an aerial shot of the Zocalo, the big central plaza in Mexico City.  I was here when Michael Jackson died and just happened to be at the Zocalo during the world’s largest Thriller performance in his honor.  There were hundreds of thousands of people dressed up dancing to the song and they broke the world record for the biggest public Thriller performance ever.  Here’s a picture: 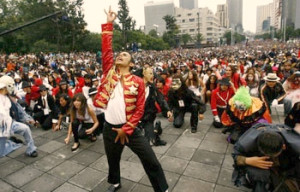