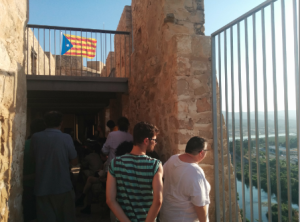 This was the scene of last night’s concert as part of the SIRGA Festival in Flix (pronounced Fleesh,) a very small town about three hours out of Barcelona.  It’s hard to see as I was trying to capture everything but we’re in a medieval Spanish castle overlooking a beautiful river valley and, inside the castle, there are musicians performing a piece by Giacinto Scelsi.

Throughout the evening we moved from room to room within the castle to hear music by composers from Spain, Germany and other parts of Europe.  Most of the music called for extensive electronics and I was impressed by the sheer amount of gear that they hauled all the way up here to make it work.

There were also no technical difficulties which is a minor miracle in itself.  I found the experience exhilarating.  We basically had a slow tour of the castle with a concert along each step of the way.  Tomorrow night we’ll be in a church that’s nearly as old as the castle.

I’m very impressed by the musical quality of the SIRGA festival but equally impressive are the stunning venues for each concert.  The flag flying from the castle by the way is the flag of Catalonia, not Spain.  I gather that’s rather a hot button issue here…