Notes on Sanya Glisic: Part I 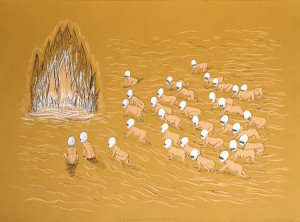 I’m in the midst of writing music inspired by the incredible art work of Sanya Glisic. The first thing I did was start a journal of my thoughts on each of these works.  Here are my thoughts for this one titled “What We Worry About, What We Can’t Help”

How to depict this picture musically?

The sea of orange is the very first thing I see. I am lost in it, searching for a focal point.   Which is the oasis of flame.  Which is the focal point for the various figures apparently trying to move toward it.  Or many of them are trying to move toward it, not all of them.  Some are resting or taking a break or perhaps worshipping it.   It’s also a self-contained tableau, there are no waves outside of the central field of vision.  You know, it’s not an oasis, it’s a flame.  The figures are not human, not fully realized or recognizable as anything.  They are representations?  Parts of the soul yearning for the fire?

At any rate, yearning, sea of orange, focal point. how do you depict orange in music?  Should i worry about that?  I create a sense of infinite space with waves, a sense of recurring, predictable motion.  The figures want to go to the flame. In this moment the flame has always been there.

The piece of music begins with the arrival of the flame.  The figures would not be going toward it if it had not arrived relatively recently.  There is a great event, it is the arrival of the flame.  There is a kind of scattering that is caused by the flame, there is a sense of struggle to get to the flame, they do not reach it in the painting so they do not reach it in the piece.  THe piece does not fade out and away, it still struggles to reach the flame until the very end, but we do not know if they get there. It is outside of our knowledge.

What to make of the title?  We can’t help trying to reach the flame?  A spiritual goal?  We all want to have a spiritual goal and can’t help it?
What do we worry about?  Day to day things?  All of which seem to have been stripped away in this screenprint.

The piece opens with an eerie kind of sound but there is also a sense of motion right away in the cello.  The sax is in its lowest register, the flute is singing an eerie siren song.  The clarinet is bending through micro tones.  It’s an uncanny sound that we’re going for here, restless, irresistible.

There’s an ambiguity in the work too that I like and that I think is represented musically in the faster section.