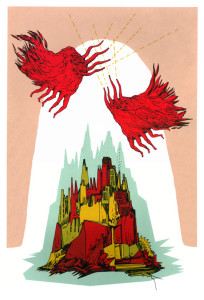 Still hard at work composing music inspired by the works of artist Sanya Glisic. This one has the rather provocative title The Ascent.  For each of these paintings I’ve kept a journal of my thoughts to try and sort out what the heck the work means to me and how the heck to represent it musically.  Here are the entries about The Ascent.

Initial thoughts upon seeing the art

But I love this one.  The imaginary city, distant metropolis like in my own imaginings. Makes me happy to see such a thing. I think of grounded music, majestic but mysterious that does slowly ascend but never transcends the initial feeling of mystery.  And the figures above the cosmic city, what to make of them?  Are they bizarre trapeze artists depending from lines with no apparent anchor?  Are they animal or mineral?  Sentient beings?  protecting the city? Facilitating its ascent?

I was thinking in bed this morning that you have to go down in order to go up and that perhaps the piece should start in the high registers for each of the instruments and then gradually work their way down and then start back up.  But looking at the art again I’m not sure this is quite the right idea.

The painting has a mountain city or palace or some kind of fantastical structure, or series of structures, on an island and then there is the silhouette of that too.  Then there are the strange seraphic creatures acting like censors above the city.  What are they doing?  The dotted lines look to me like ropes upon which they swing or not ropes exactly but some kind of gravitational bond that holds them in the air and allows them to swing over the city.

If you look carefully too you’ll see dotted lines emanating from one of the pointed structures on the right of the city.  There also is a fault or crack in the firmament to the right side of the bottom of the work.

There’s something vaguely, or maybe not so vaguely, reptilian about this painting.  What if the censor/seraph creatures are swinging wildly above the city like trapeze artists?

Ok, some actual music now.  The cello bows open fifths on open strings, G and D will work.  This throbs with submerged power and a sense of fateful portent.  Then the winds, what do winds do well?  They make these blendy beautiful ugly weird sounds well.  They can be cold, ice cold. I know the painting is full of vivid warm colors but the contrast between the cold winds and the throbbing cello, the powerful cello underneath with the cold interjections on top I think will be nice and will convey the sense of power but also desolation. The city appears to be empty after all.  Powerful desolation defines the opening of the piece.

Then after a minute or so of this the ascent will begin.