Rise of the (Useless) Machines

I took a little bike tour of the Bronx a couple of months ago which, if you’re the kind of person who prefers to bike without traffic barrelling unpredictably at incredibly high speeds in all directions with absolutely zero thoughts given toward hapless bikers slowly making their way up ludicrously steep hills in a joke of a bike lane which is really just a bike symbol spray-painted onto the side of the road, I cannot with any degree of honesty recommend.

Still, I did manage to survive the worst parts to make it to a more or less flat stretch of the Grand Concourse where there is a divided bike lane and I could catch my breath.  After falling on my knees and thanking the patron saint of bicyclists (Madonna del Ghisallo in case you don’t know) for watching over me, I looked up and saw the Bronx Museum of Arts and decided to head in and see what was shaking.

There were several great exhibits including photographs by Alvin Baltrop, one of these artists who lived a quiet, mostly solitary life and then died leaving behind a wealth of awesome art.  That seems to happen more often in visual arts and literature than in music doesn’t it? I wonder why that is.

Anyway, the exhibit that totally floored me was called Useless Machines for Thinking, Dreaming, Feeling.   According to the museum it has long been a practice of philosophers and thinkers to praise uselessness as a way of showing the importance of spiritual or creative activities without clear goals.

I wish someone had told me this in high school!  I wasn’t wasting my life playing video games, I was “praising inutility as a reaction to the materialistic values promoted by capitalist society.”  Jeez.  At any rate, the exhibit then says that because machines are generally associated with things that do something practical, the importance of art in society is especially highlighted when artists create machines that do nothing.

Right away I knew I wanted to write a piece exploring these ideas and I had the perfect outlet for it.  I run a music series called Concept Lab which exists to give composers a chance to experiment, try out new ideas and as we say “fail productively,” though composers who write successful pieces are not punished.  Not immediately.

I have to admit though that I myself have not taken full advantage of this series.  I have taken no real risks.  Each time I’ve written a piece that I knew would work and that I was not the least bit trepidatious about putting into public.  So now was my time to go down in a blaze of failure glory!

I wrote a piece for three instruments but each instrument is a separate part, independent from the others. There is no score and they were not meant to rehearse it or have any idea what the other players have before the performance. Each part is in a different time signature and tempo.  But they were supposed to be three separate parts of the same useless machine.  A machine made only to ruminate.

What was hard about this was that I couldn’t play the three parts together on the piano or put the piece into MIDI. I had to spend a lot of time being inutile, just sitting there imagining what this would all sound like.  On the day of the show though they played it wonderfully and it worked so well that I’m planning to expand it into multiple movements.

It turns out that not being able to control what it would sound like was a great way for me to get out of some of the common tendencies I fall into and really write something new.  Check out the video of the performance below featuring Talia Dicker on cello, Ford Fourqurean on bass clarinet and Irene Fitzgerald-Cherry on violin. 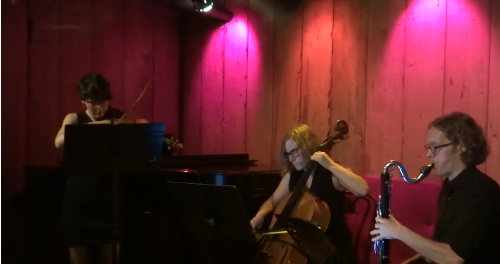 And now that you’ve heard the piece, here is a short video of the machine that inspired it called Blue Angel Eye. The artist is Shih Chieh Huang. 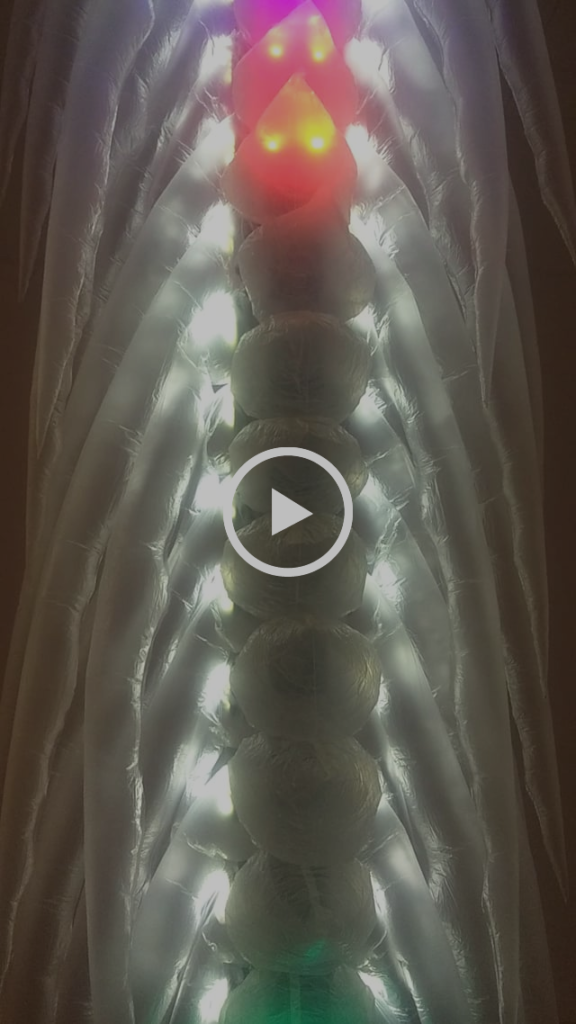