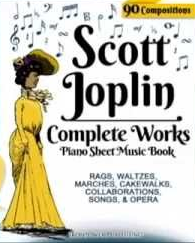 We’re getting slowly closer to the end of the year which is the time when people start thinking about how they can improve their lives and be better people in the year to come.

I never think about things like this because I’m already as good as I’m going to get, but I was reminded recently of a life goal that I impetuously set many years ago which I have as yet failed to meet.  It was my 22nd birthday and I was a music student at the University of Missouri Columbia by day and a delivery driver at a sub sandwich shop by night.

I had always had a kind of prickly relationship with the store manager but on the occasion of my birthday he surprised me by giving me a really thoughtful gift: the complete rags of Scott Joplin.  As pretty much anyone who knew me at the time knew, I was a big ragtime fan.  I was touched by the gift and told everyone within hearing distance, (four other employees and three customers if memory serves) that I would learn them all.

Fast forward 22 years and I can competently play about half of them and can hack my way through another ten or so and the others I haven’t even started on yet.  Joplin wrote a ridiculous number of rags!   And they’re hard too.

Also, it seems that hardly anyone ever wants to hear me play them.  From fellow music students to girlfriends to random passersby, ragtime is nearly always greeted with at best a condescending smile and at worst malicious, anti-ragtime comments on Twitter.  Yes, that happened once when I was playing a ragtime piece publicly.  It’s hard enough to perform without worrying about the audience flaming you on Twitter before you even finish the piece, but I’ll save the anti-Twitter diatribe for another time.

The other reason that I’ve never learned them all, the real reason, is that, once I learned twenty or so I became lazy.  I enjoyed playing the pieces I knew and didn’t seek out the new rags. But I got the book out yesterday, which has been schlepped from apartment to apartment and piano to piano for so many years now that it’s in tatters, and learned a new rag called Solace.

It’s a beautiful, melancholic rag and I enjoyed learning it so much that I’ve decided to learn another new one.  Who knows where this will end?  Perhaps years after my impetuous promise I’ll actually wind up fulfilling it.

I don’t know though because again, they’re really frickin’ hard!