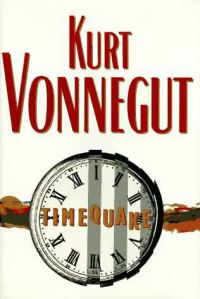 I remember vividly when Vonnegut’s last novel Timequake came out in 1997.  I actually went to the University of Chicago to hear him speak and bought a signed copy of it.  One of my first author autographed books. This would become something of an obsession with me and I now have a great many signed books.  Of course there are fewer author signings now that no one reads and no one has a physical book to sign but that’s for another day.

I’m thinking about Timequake now because of a Malcolm Gladwell article in the most recent New Yorker in which he talks about late bloomers and prodigies in the arts.  The example he cites most frequently is Cezanne as the ultimate late bloomer versus Picasso as the ultimate prodigy.  Cezanne borrowed money from his father all his life and didn’t make his first masterpieces until he was in his sixties.  Picasso, well, everyone knows about Picasso.

All of this was very interested to read, especially as I consider myself to be a late bloomer, certainly rather than a prodigy.  But it also reminded me of Timequake in which Vonnegut divides creative types into “swoopers” and “bashers.”   A swooper is someone who creates easily, the inspiration flows and the quality of the work is generally even.  A swooper creates pretty reliably good art with relatively little effort.

A basher on the other hand is someone who sweats and struggles for months, even years on a single piece of art and the quality is not always even.  A great example that I think of from history are the two greek playwrights, Sophocles and Euripides.  Sophocles was a swooper. He wrote effortlessly, he was instantly successful and the works that have survived are all of high quality and there’s no reason to think that the other works were any different.

Euripides, however, took much longer to write plays and he wrote many plays universally considered to be awful.  But when he was good he was the best there ever was.  Sophocles couldn’t hold a candle to Euripides when he was writing at his best.  For the record, Vonnegut considered himself to be a basher.

I’m definitely a basher, no doubt about it.  A late blooming basher killing myself to bash out uneven work. I only hope that the best of that work has a tenth of the power of Euripides, or Vonnegut himself for that matter.