Fireworks Again? Really? How About Something New? 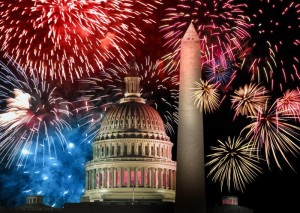 Isn’t that a deliciously bizarre photo?  I was looking for photos of the Fourth and came across that one, which I’m pretty sure has been photoshopped which only makes it all the stranger, and it called out to me immediately.  The Washington Monument always looks strange but here, surrounded by fireworks and dwarfing the more feminine looking than usual capitol building and with the perspective all out of whack, it looks like two grotesque figures cavorting in a vacuum during some kind of all out aerial attack.

Anyway, I have to say that nothing brings out my inherent misanthropic tendencies quite like the Fourth of July.  It’s not like I want to be a misanthrope, it’s just something I seem to be inherently good at.  Some people can naturally juggle or hold their breath for a long time or cook delicious stews.  Me, I’m naturally talented at grumbling under my breath while everyone else in the world is having a good time, and that makes the Fourth of July a kind of living hell.

For two days there has already been an incessant barrage of fireworks, and not the big ones that actually do something but the little cracker ones that just go pop pop pop.  Someone has strung thousands of them together and has spent the last two days mindlessly, relentlessly setting them off hour after hour.  How many of those fucking things did you buy??  What kind of mentality derives joy from doing this over and over for days at a time?  I’m almost tempted to go out and ask but I’ve learned over the years not to do that.  It never leads anywhere that’s in my long term health and safety interests.

I would like to propose new activities for our great nation on the Fourth of July.  Instead of parades and marching band music and stuffing our fat faces with fatty foods and the mindless blowing up of innocent fireworks that were just trying to mind their own business on shelves in stores in small towns throughout Indiana, let’s celebrate our independence with a quiet New York Times crossword puzzle on the back deck or a rousing chess game with your neighbor or finally learning that Schubert sonata you’ve been putting off because you know you’ll have to actually take the time to write the fingerings in and that attention to detail isn’t your strong suit but dammit it’s the Fourth of July and if you can’t do it now when can you?

Most likely I’ll be one of the few people in the country celebrating the holiday this way but it is at least a small step in the right direction.