The Joy of Salons 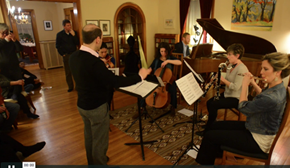 For the past nine years ACM has had a project called Composer Alive in which we’ve commissioned composers from countries around the world to write a new piece for us.

Nothing unusual in this except that we’ve asked them to write the piece in short installments so our ensemble can play each installment in front of a live audience and post the audio to the site in real time as the composer writes it.

The problem with this is it’s hard to get an audience to come to watch a group rehearse and record two minutes of music.  We’ve tried this every which way over the years but this year, I think we finally hit on the right way to do it.

We’ve partnered with two people who frequently have salon-style events in their homes featuring musical and other arts performances and asked if we could partake.  It turns out that this is the perfect format in which to unveil part of a new piece and rehearse and record it in front of an audience.

The intimate setting, the gathering of people who are interested in the arts conspire with the wine and appetizers to create a conducive atmosphere for listening to unfamiliar music in an appreciative way.  I wish we had thought of this years ago!

From now on this is how we’ll conduct all of our Composer Alive projects and I’m already looking forward to next year.