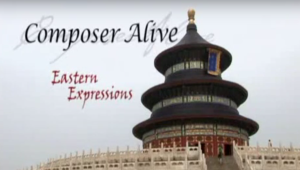 Ten years ago I was in a hell of my own making. I was in the middle of Eastern Expressions, ACM’s first large-scale project and I was in so far over my head it wasn’t funny. I had the idea to commission a composer in a different country from us and ask him to write a piece and email it to us in short installments as he composed it. We’d meet and read and record each installment and post it to our website for him. When the project was finished we’d bring him to Chicago and give the world premiere performance. It was, as they say, a simple plan.

I chose a wonderful composer in China named Xiaogang Ye and he agreed to this unorthodox style of working and we were off. As it turned out we were starting this project just as Yo-Yo Ma was announcing a huge initiative called Silkroad Chicago and we were able to become part of that larger project. Then I asked my filmmaker colleague Dave Less to film the rehearsals for what I thought would be just website posts.

But then Dave and I got a wonderful interview with Henry Fogel, the former head of the Chicago Symphony and he went on a diatribe about how classical music had created most of its own problems. It was killer stuff and we decided we had a documentary film on our hands. Then I managed to talk Boeing into funding us and they vouched for us with United and before I knew it Dave and I were filming in Beijing.

You can see where this is going. The project kept scaling upward until it was practically out of control. Every bit seemed manageable on its own but I was too inexperienced to see how, in the aggregate, it was a disaster waiting to happen. By the time of the final concert on September 10, 2006 (a date etched into my mind) I was wildly overcommitted and we were thousands of dollars over budget.

I managed to raise the money and solve the logistics challenges (I had to break down and call my mom who rented a van and helped me pick up our musical guests flying in to two airports from six different cities) and we got through it but in many ways it was a harrowing experience.

Looking back now I realize that I put myself through that at the time partly because I was inexperienced and didn’t know better but mostly because I was impatient. I wanted ACM to be a large organization RIGHT NOW and thought this project was a kind of magic bullet that would make that happen.

And the project was a huge success but what I didn’t know then was that you have to have the infrastructure to handle big projects. There are no magic bullets and, as I’m sure most arts leaders will agree, calling your mom is not a sustainable option.

By the way, if you’re curious to see that interview with Henry, it’s here.