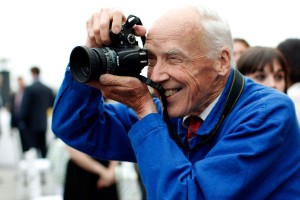 I had never heard of New York Times fashion photographer Bill Cunningham until I watched a documentary about him the day after he died but he’s been living in my head ever since. I’m fascinated by his life because, at least on the surface, it was about as simple a lifestyle as it’s possible for anyone to have.

He was never in a relationship and in fact had no human entanglements of any kind.  He lived for much of his career in a tiny apartment in Carnegie Hall, tore up most of his paychecks to avoid being “owned,” ate every meal in the same restaurants and spent every day doing what he loved: biking through Manhattan photographing fashions that caught his eye. He truly was a kind of urban twentieth-century monk who just happened to have a great eye for women’s hats.

This is not the life that I would want to live and the film certainly hints at darker waters beneath the surface but I do understand the appeal of a life lived virtually without complications where each day has a ritualistic comforting sameness and I do believe that, for the most part, he spent the vast majority of his life in contentment and even happiness.

I’m not the only one in awe of the idea of the simple life simply led. The idea is in vogue now around the world but there’s a dark edge to it. This is no monastic life being dreamt of, but a life in which society conforms to a homogeneous ideal.  And when this fails, as it always does, they respond through acts of violence, isolationism and the conjuring of imaginary bogeymen who haunt public restrooms.

But there’s no going back.  Isolate yourselves into any kind of homogeneous group and it’s only a matter of time before someone comes out as different.  It’s a fundamental part of being human.  Although for that matter,  unfortunately, so is fearing that which is different. But diversity is inevitable and it’s time people got used to it.

The great thing about Cunningham is that he lived a simple life personally but in his work he sought out and celebrated diversity. If his legacy teaches us anything, it’s that the two don’t need to be mutually exclusive.