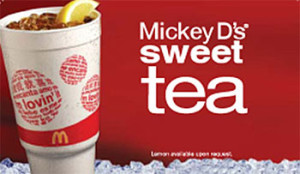 We’ve had a lot of great challenges in this country, not least of which was the civil war which as we all know was fought over whether or not to sweeten iced tea.  Ever since losing the war, the south has fervently promised to rise again and of course we northerners have always considered this to be complete drivel.  But all of a sudden I’m not feeling so smug.

As an avid consumer of iced tea, (I would say 2-4 cups a day on average including a disturbing tendency to keep my cups from Panera and Chipotle so that I can refill at different locations later in the same day or sometimes on a completely different day,) I have noticed a troubling trend of late: more and more restaurants are defaulting to serving iced tea pre-sweetened or favoring teas that are sweeter than a nice, comfortingly bitter black tea.

This can only be the nefarious work of the southern states who invented the idea of sweet tea in the first place.  New York, Chicago and Boston are no place to drink sweet tea.  Plus it just doesn’t make any sense. Why pre-sweeten the tea?  You can’t take sugar out of the tea but you can always put it in.  It’s totally crazy and I for one will not have it!

Mark my words and look around you.  Sweet tea is only the beginning.