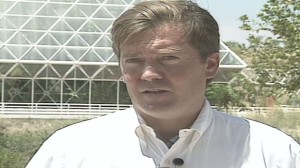 I spent a recent weekend afternoon, yesterday afternoon if you must know, on the couch watching basketball with the sound off while listening to the audio book version of Fire and Fury.  I was watching the Houston Rockets light up the San Antonio Spurs while the narrator, a marvelously deadpan Holter Graham, shared the inner workings of what appears to be the most dysfunctional White House administration in modern history.

It was about midway through the second quarter, I remember because James Harden had just finally missed his first shot of the game, when I heard that one of Steve Bannon’s many pre-Breitbart jobs was running Biosphere 2, an experiment to see if humans could live in a completely closed system for two years as a prelude to colonizing other planets once we’ve finished making the one we currently live on uninhabitable.

This was in the early ’90’s and it was a complete disaster, largely because of cost overruns and extensive litigation by two former biospherians who had a long-running dispute with Bannon.  The cost overruns, by the way, were probably because they built the thing, out of glass mind you, in the Arizona desert and cooling it cost more than a million dollars a month which, you know, maybe there was a better way to have done that.

Anyway, as it happens, I’m a bit more than halfway through T.C. Boyle’s latest novel, the Terranauts, a fictionalized account of this very same Biosphere project and I actually sat up from my slumped position and said aloud to no one, “what a strange coincidence.”

Of course the Biosphere program is well known because of that critical darling of a Pauly Shore movie which used rapier wit to unearth the sublimated Freudian return-to-the-womb desires inherent in the project and couple them with razor sharp dialogue revealing the human condition in all its tragic grandeur.

Or was that a different movie?

Anyway, I sat there thinking of rumpled Bannon overseeing a sterile 3-acre glass ecosphere in the desert, barely watching as Houston continued to eviscerate San Antonio, and wondered if maybe this wasn’t the way of the future after all?

Maybe Steve Bannon and Pauly Shore have it right.  What if we all had our own ecospheres?  There could be artificial environments tailor-made for conservatives, liberals, foodies, early music people, consumers of Tide pods, lovers of Pauly Shore movies, you name it.

We’re heading there anyway so we should get a jump on it.  As for me, having spent so many idyllic childhood summers in Lord of the Flies camp well, I’ll be fine in any of them.