When Does it End? 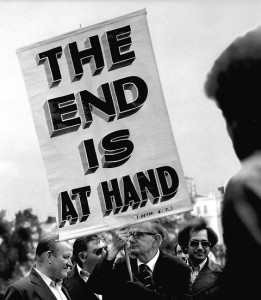 I’m putting the finishing touches on the first movement of my new piano concerto and am facing a familiar conundrum. How do I know when the piece is finished?

This is such an interesting problem for composers and I’d love to hear from others about how you know when a piece is done.  For me I guess a lot of times it’s when I just get tired of futzing with it and have to move on.  Other times I’m forced to stop working by an impending deadline which is kind of nice.

How many times after a deadline has passed and I’ve sent the piece to the performers have I said that I would go back later and fix it up?  Almost every time.  But how many times have I actually done this?  Almost none and I think it ‘s a good thing.  It really is so easy to fall down the rabbit hole and continue to work on a piece long after it’s done.

There have been many times now when I’ve heard a piece of mine performed and remembered the struggle I had with deciding that it was in its final form.  But upon listening I could never remember where I had had the trouble.  The truth is that the piece now exists in that form and that’s what it is.

Could I have made it better?  Possibly.  But it gets not only highly subjective at this point but also highly theoretical and for me at least I’d prefer to bang out another piece than endlessly wrestle with the same few bars.  That said, I really need to improve the middle section of the concerto, it’s just not quite right…