A Song of Dead Birds 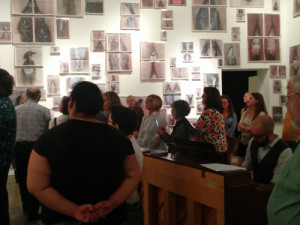 I caught a performance tonight in the SITE contemporary art museum that I won’t soon forget.  About fifty of us were shown into a room with walls covered in the provocative art work by Ann Hamilton.

The artist is very interested in the intersection of man, urbanity and nature and the effects that our increasing trend toward urban environments is having on nature.  In this particular exhibition she focused on birds that had been killed as a byproduct of human activity.

She took the actual body of the dead bird and scanned it with a highly sensitive, color scanner and then hung the scans on the wall of the room.  But there were hundreds of copies of each scan and anyone seeing the exhibit is invited to tear one off and keep it as there are plenty more copies underneath.

The room was bustling as people discussed the images and the piano for the moment went unnoticed even when someone sat down at it.  Soon he began to play the intro to a song by Benjamin Britten however and a woman in the crowd began to sing and the room was transformed.

For the next 45 minutes she walked around the room and sang songs by classical composers like Britten and Vaughan-Williams as well as spirituals, an arabic inspired piece for which she accompanied herself by tapping on the piano in rhythm and finally, Sometimes I feel Like a Motherless Child.

Throughout the performance the music was periodically punctuated by the sound of tearing paper as someone would be moved to take an image down.  The whole experience was quite moving and I was thrilled to have stumbled upon it.  One of the great joys of traveling is the opportunity to see and hear things you would never have experienced at home.